Stepping off the sidelines

If you asked someone not involved in a team sport for three words to describe what they thought team sport was all about, they may not be the first three words that they think of.  But they’re three of the recurring words you hear when speaking to Anna West about the role rugby plays in her life.

It’s a role that was previously confined to supporting her husband who plays for Wath RUFC.  But now, rather than just watching her husband play rugby, she gets the opportunity to play alongside him.

“I like to go down and watch the senior team training because we’ve not had any proper rugby to watch for a while,” explains Anna. “I was watching the walking rugby and I was itching to have a go. I joined in and I loved it.

“I always stood on the side lines thinking, ‘I could have a right good go at that, if only I could catch!’  I’ve never been particularly into sport.

“I’m an only child but I’ve got loads of boy cousins. They’d play every sport under the sun, except rugby. I’ve been with my husband for six years now and I’ve been watching him, and it’s a sport I can really get into.

“When I’m watching, I always like to stand next to someone who knows rugby so I can ask questions and understand what was happening. The more I learnt, the more I was thinking that I just wanted to have a go.

“I’ve just loved it. It’s so, so good. Being part of a team is something I’ve never done before. I used to go to dance lessons and singing lessons, and you’re very much an individual in those sort of things. That sense of accomplishment when being on a team is amazing.”

The This Girl Can campaign from Sport England has spent the last six years supporting women to overcome the barriers that stop them from being physically active. A common barrier is fear of judgement.

The primary school teacher from Wath concedes that confidence was a barrier for her in the past.

“I was bigger when I was at school and I didn’t think that my body could run that far,” says Anna.

“I’d get out of breath really easily so I just didn’t do it because of a fear of failure. I had nightmares from playing rounders when you don’t catch it when everyone is shouting ‘catch it’. That pain of letting your side down was just something I avoided completely.

“I would always avoid team sports, even at social events like a garden party when you might have a game of rounders or something. There aren’t many things that socially I’d shy away from, but that is one of them.

“I did start to get physically active when I was at university. I used to run, go to the gym, but never considered playing a sport.

“I found it quite isolating going to the gym and running.  I never particularly enjoyed it but it was something I felt I had to do at the time to lose weight. But playing a team sport is just so nice. I enjoy the full hour-and-a-half, chatting with friends. When I’m at the gym or running, it’s me bullying myself to do something. When I’m at walking rugby, we’ve got older gentlemen who have returned to rugby and play a coaching role. They’re giving me tips and it’s a really lovely, all-round experience.” 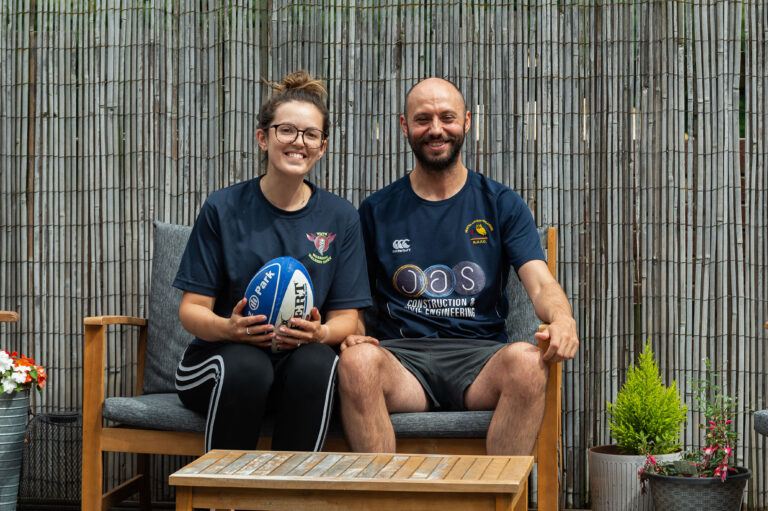 That walking rugby experience couldn’t have come at a better time. Anna reflects now on a breakdown she had during the first lockdown of the coronavirus pandemic, which has led her to therapy sessions that she says have been a huge help. Anna is learning to take control of her OCD, and sees the role the sessions have played in her increased confidence.

“It’s outdoors and that does wonders for me. I think that’s what I enjoyed about rugby in the first place. I’d spend every weekday at work, cooped up, so when I was watching my husband play on a Saturday, it was great to be outdoors. That’s what walking rugby does for me now.

“I’ve found I’m a lot more confident. I talk about how much I’m enjoying it and being part of a team. I feel like I’m talking about it all week!

“The best thing about it is connection. It’s time that I can connect with my husband. We communicate on a completely different level when we’re playing rugby together.

“And I’m also connecting with nature. It’s brought a mindfulness and I’m so grateful, I really am.”

To find out more about the walking rugby sessions in Wath, visit the Active Dearne Wath Facebook page.

At Yorkshire Sport Foundation we include everyone, as we believe sport and physical activity is for everyone.