Mayor of West Yorkshire, Tracy Brabin, paid tribute to the role of grassroots sport at the Yorkshire Homecoming event for our Olympic and Paralympic athletes on Sunday.

Speaking on stage at the first direct arena, the first elected mayor of the county saluted the achievements of the athletes in attendance, which included taekwondo star, Bradley Sinden, and Paralympic icon, Hannah Cockroft MBE.

The former MP for Batley and Spen described grassroots sport as the “beating heart of our community.”

“They bring people together to celebrate competition and achievement. It also enriches our lives and improves wellbeing, something we really are in need of after the last horrendous 18 months.

“It also creates a sense of optimism and togetherness, and a sense of identity. Sport at its best is also inclusive and diverse. After such a tough time, it has been so great to be with you. All of you superb athletes are the best of us and we are bursting with pride.”

The two-hour celebration was a collaboration between all 22 local authorities from Yorkshire, with support from Channel 4 and Moda.  The crowd, which included families and friends of the region’s sporting heroes, were treated to a diverse range of entertainment that included rock band, Skylights. There were also performances from Spark! and Phoenix Dance Theatre. 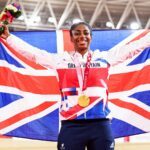 At Yorkshire Sport Foundation we include everyone, as we believe sport and physical activity is for everyone.