Rob Thewlis from Huddersfield shares his story about how physical activity and joining Andy’s Man Club helped him in many ways:

It all started in 2016. I wasn’t active. Exercise was a banned word in my vocabulary. But then in early 2016 by my Mum passed away. My mum was my best friend and it hit me pretty hard. A couple of weeks before, we had made a plan to lose weight to-gether. She didn’t have time to start her plan, so I decided that I would carry on in Mum’s memory, it was my way of dealing with grief. I hired a personal trainer and within seven months,
I had gone from 20 stone to just over 13 stone.

I’ve moved gyms and changed my training, but put five stone back on in six years. I liked running and went back to my old personal trainer. This year I ran at the Manchester Marathon at 18 stone. It was really hard at that weight. Put a lot of pres-sure on my knees and my lower body.

When a friend showed me photo, I cried. Yes, I had completed a marathon, but I didn’t like the way I looked. I have always struggled with that. In six months I’ve lost three stone. The overall goal is to run a five-hour marathon next year, and then run 45 miles at an event in summer.

This year I ran 25 miles in 12 hours in five-mile bursts. And then, seven hours later, I got up and did a 10k – that is 31 miles in a weekend. I never imagined I would be able to do that, but once you start believing in yourself, change happens. Only you can make a change. No one can make that change for you

Back in 2016, I didn’t speak to anyone before starting Andy’s Man club. It gives you the community men don’t often have.
Men don’t really talk, especially to other men, because it’s seen as weak and sad. What surprised me is that I had thought ‘I don’t need to talk, I will be fine, I’ll get over it’. But you don’t always get through what life has thrown your way without talking and releasing.

I first joined at the Shea Stadium, there must’ve been about 30 guys. It was really overwhelming and I didn’t speak, but I knew change was happening, just by me sitting there.

It’s opened up a friendship circle that I never thought I would have, people who are truly there for you in more ways than one.

There was a bloke there who had started the week before me. After a couple of months I was being invited round to his house, met his wife and invited to his wed-ding. It opened up that true friendship. that I never would have had.

I had attended Andy’s Man club for three years, starting off in Halifax. In the summer of 2017 I was offered the role as lead facilitator in Huddersfield and I cried, that was the first time someone had truly believed in me as a person.

Just seeing guys come through that door, whether it’s just for one session, or several or are still there a year later, truly shows how important it is to speak.

Within about three months We had outgrown the basement we were in. I took a step back in 2019 due to work issues from working shifts.

I can’t really complain about life. It’s been really tough, with my mum passing away but you have got to find little positives in life.

If something is not going right in life, whatever the direction, you have the power in you to make that change when the time is right. Just go for it.

That is where my mentality has changed. For years, I thought I would never be good enough, but you’ve got to take that jump into the unknown otherwise you will never know.

There are opportunities out there for everyone, you have just got to make that jump. And that is what I have done. Not only in my work life, but also my fitness life.

Unless you have someone particularly close to you, you don’t really speak much. That is why Andy’s Man Club is so important.

It shows the power it has by simply opening its doors for a no obligation chat about absolutely anything that might be troubling you.

In mid-2016, nine men met in a small room in the typical Yorkshire town of Hali-fax with a simple aim of talking through their issues and helping each other deal with their mental health. All in attendance were agreed there was a magic in that room that had to be shared.

This was the start of a movement that has grown faster than anyone first in-volved could have ever imagined. Fast forward almost 6 years and ANDYS-MANCLUB now has groups at over 110 locations across England, Scotland and Wales.

ANDYSMANCLUB takes its name from Andrew Roberts, a man who sadly took his own life aged 23 in early 2016. Andy’s family had no inkling that he was suf-fering or struggling to the extent that he would do this, and as a result looked deeper into male suicide and men’s mental health. They soon discovered that male suicide is the biggest killer of men under 50, with Male Mental Health sur-rounded by well-ingrained cultural stigma in the UK.

Elaine Roberts and Luke Ambler are Andy’s Mum and Brother-in-Law, together they came up with the idea of ANDYSMANCLUB, a group where men aged 18 and above can speak openly about their mental health in a judgment-free, non-clinical environment.

Groups now operate nationwide and are completely volunteer-led, with the vast majority of group facilitators having first interacted with ANDYSMANCLUB when they came through the door as a service user.
With their service used on a weekly basis by over 2000 men, and an army of over 500 volunteers on board, the movement is continuing to grow on a week by week basis. 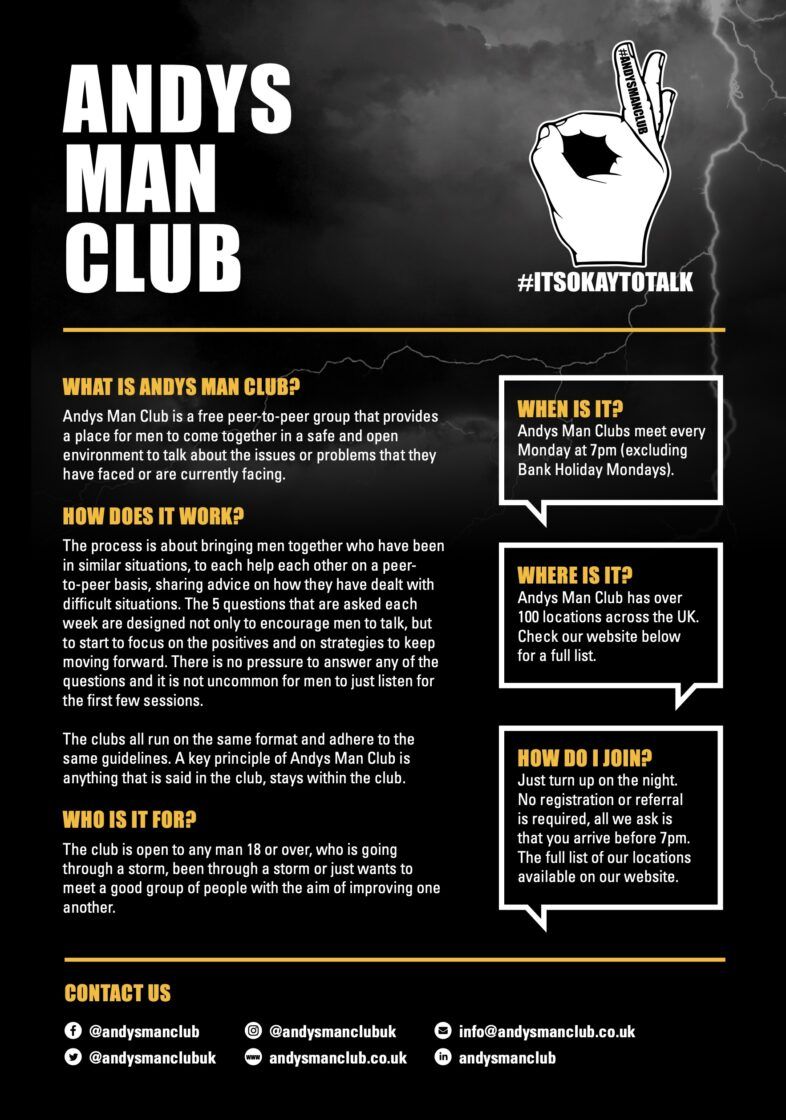